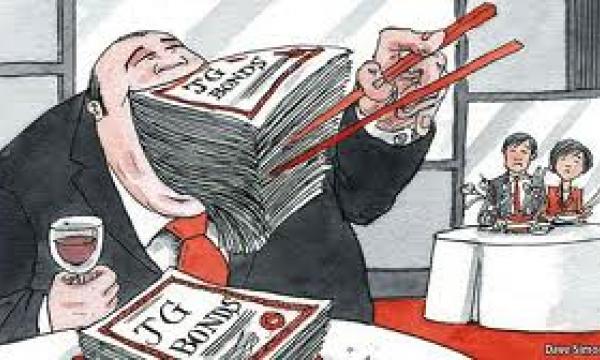 The IMF is conducting is gauging the vulnerability of Japanese banks to a potential drop in the value of their huge holdings of Japanese government bonds.

The  International Monetary Fund's tests may shed more light on another danger: the broad exposure of the Japanese financial system to JGBs and how much damage a rise in bond yields could inflict on Japanese banks. This comes as governments around the world are particularly sensitive to vulnerabilities in the financial system and to their own finances, in light of the euro-zone debt crisis.

Credit-ratings firms, investors, and even Japan's central-bank governor have expressed concerns about the growing debt, now equal to about twice the country's annual economic output, but much of the attention has been on the government's ability to sustain its large budget deficits.

The stress tests will be the first since 2002-03, when the IMF conducted its first close inspection of Japan's banking system under its Financial Sector Assessment Program. Japan isn't being singled out; the U.S., Germany and the U.K. also have been subject to similar FSAP examinations, one of the people said.

A BOJ report on the financial system in October indicated major banks could sustain capital losses worth about ¥3.4 trillion and regional banks could face losses of ¥2.8 trillion if bond yields were to rise by a one-percentage point across the curve, pushing down prices of their bond holdings.

"Within both major and regional banks, the risks associated with bond investment have clearly increased," the BOJ report said.

Japanese interest rates could eventually rise if the government fails to get a grip on its budget deficits, analysts say. Public debt has grown to more than 200% of gross domestic product from around 150% in 2003, higher than any other major industrialized nation, including debt-crisis-hit European economies.

The results will depend on assumptions used, such as how quickly JGB yields could rise. Some finance ministry officials say the pace of any JGB yield gains could be slow as it wouldn't be easy for investors to shift such huge amounts of money quickly into other assets. But analysts warn moves could be abrupt, as illustrated by the rapid rises in Italian government bond yields in recent months.

Few economists expect Japan to fall immediately into a crisis similar to that in Europe. More than 90% of JGBs are held by Japanese investors. Japanese private-sector savings, for now, is also enough to absorb the government's debt sales. But if Japan's current debt trajectory continues, it could become harder for the government to maintain such stability in the JGB market.