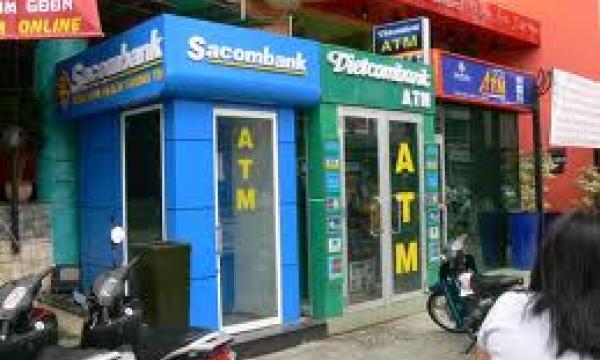 Vietnam's banks have to intensify measures in coping with a sudden surge in withdrawals at their ATMs.

Huge crowds can still be found in front of ATM booths around HCM City ahead of Tet holidays, with armies of workers converging at ATM stations to withraw wages and Tet bonuses.

Nguyen Tan Dinh, deputy head of the HCMC Export Processing Zones and Industrial Parks Authority, said long queues had been spotted in front of ATM stations in industrial parks as several enterprises have paid their workers before Wednesday, or the 25th of lunar December. Many ATM trucks have also been sent to these places to meet the growing cash withdrawal demand of workers.

Having the highest number of ATMs nationwide, 1,626 machines, Vietcombank has doubled the numbers of money transport vehicles and staff to ensure its ATMs have enough cash for withdrawal.

Le Huynh Ha, head of Vietcombank’s ATM services, said the bank had foreseen stronger cash withdrawals at this time of year, so it had doubled the amount of cash in each ATM with plenty of 200,000 dong or 500,000 dong notes and mobilized more ATMs.

However, congestion has still happened at Vietcombank’s ATM stations as many customers of other banks also use its ATMs that connect to those banks’ ATM networks via BanknetVN, Smartlink or VNBC.

Small banks that also have ATMs are struggling with liquidity problems, so their ATM card holders rush to Vietcombank’s ATM network, making it hard for Vietcombank to ensure enough cash, said Ha.

DongABank has the second largest ATM network behind Vietcombank. With over 1,400 ATM machines, DongABank has still mobilized more people and resources to meet the increasing demand.

Tran Nguyen Hoai Thanh, director of DongABank’s ATM POS center, said the bank had prepared 30 new machines to replace old machines which were out of order, sent ATM trucks to places where cash withdrawal demand is running high and supplied more cash for ATMs than normal.

However, customers still have to wait and in some cases, they could not withdraw money.

Thanh said ATMs would continue to be overwhelmed in the next few days as many firms had yet to pay their employees.

According to the central bank, the number of ATMs in Vietnam has increased significantly, with 12,811 machines put in service nationwide by June last year, while the number of ATM cards had reached 40 million.